The COBRA RATTLER fighter was designed to address the threat posed by the G.I. JOE team’s CONQUEST X-30 aircraft. With technology bought or stolen from the most advanced aeronautics firms and military installations, COBRA engineers have constructed the COBRA RATTLER with next-gen avionics and engineering to reach supersonic speeds while retaining maximum control. Only an expert pilot such as WILD WEASEL is able to use its highly responsive maneuverability to its fullest capacity. Carrying heat-seeking missles and cluster bombs, the COBRA RATTLER can inflict devastating damage on its targets.

Retooled version of the Cobra Rattler(1984) with structural improvements, such as strengthened landing gear, and compatibility with GI Joe 25th Anniversary figures.

The COBRA RATTLER fighter plane strikes the G.I. JOE base with venomous ease. Its one of the most powerful planes in the air. It's only equal is the G.I. JOE® team's CONQUEST X-30, which is blasting into the sky to challenge this deadly attacker! 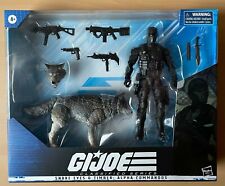