Topside grew up on a small Indiana farm where he helped his father raise champion show pigs. After winning numerous county fair awards for his pets, he quickly gained the reputation as Fort Wayne’s Hog Master. At the age of 20, he decided to leave the farm in search of a more exciting career with an ocean view. Topside enlisted in the navy and took to the lifestyle suprisingly well for a land lubber. He received on-the-job training in military law enforcement , eventually rating Master-at-Arms. He served as head of security on a ship that transported a G.I.Joe covert team to a mission site. After their deployment, he continued to monitor enemy transmissions and saved them from an impending ambush. Because of his boldness and ability to look danger in the eye, he was offered a spot on the G.I.Joe team.

Topside knows that catching Cobra is like wrestling a greased pig in the dark. Lucky for him, that is his specialty. He’s proven many times that the bigger they are, the harder they fall. However, that may not be the case when he encounters one of the Cobra organization’s toughest training instructors. 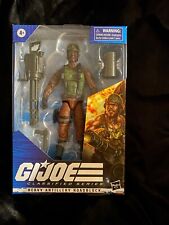