DESTRO designs and manufactures advanced weaponry and supplies weapons to COBRA. He demonstrates his latest high-powered plasma rifles by leading SHOCK TROOPERS in an attack on G.I.JOE trooper LOW-LIGHT, who has infiltrated a COBRA warehouse in an urban city. DESTRO has to quickly change his plans when he finds out that LOW-LIGHT knows they are there – and is waiting for them.

The G.I.JOE team uses their ninja training as they infiltrate a COBRA warehouse.

G.I.JOE is the code name for a special operations unit of highly trained men and women. Their purpose is to defend the world against COBRA, a ruthless organization with criminal tentacles in every nation on earth. 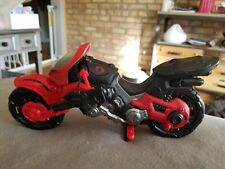